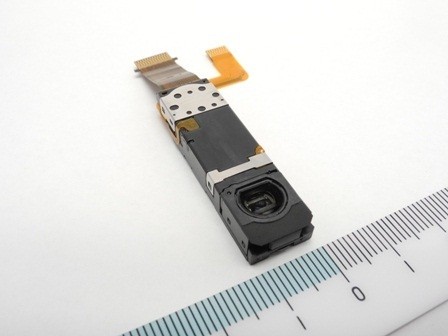 At less than 12mm thick around its camera and thinner elsewhere the Zenfone Zoom’s waistline is still perfectly acceptable for a phone, and the 13MP sensor behind a 3x optical zoom lens makes your point-and-shoot redundant, on paper at least.

Now, we’ve been treated so some additional details on the camera module that is employed in the Asus cameraphone. Apparently Japanese optics specialist Hoya developed the periscope type zoom mechanism back in 2013. The 6mm thin module, dubbed CUBE, provides a focal distance range of 3.8-11.4mm. On the Zenfone Zoom that equates to 28-84mm in 35mm terms, reasonably wide at the low end and into portrait territory at the long end. Its also a very similar range to entry-level DSLR kit zooms.

Unfortunately as usual, maximum aperture has been sacrificed for the sake of compactness. It starts off at f2.7 at wide-angle reaching f4.8 at telephoto. While we’ve seen fast f2.2 and f2.0 apertures on a few fixed cameraphone lenses, and while the Zenfone zoom’s numbers are respectable for a zoom unit at this size, they still don’t compare well. It does get offset by the presence of the other headline feature, optical image stabilization, and you get a pretty comprehensive pocket camera package.

We’re looking forward to handling a working unit of the Zenfone Zoom, as it was sadly kept behind glass in Las Vegas.