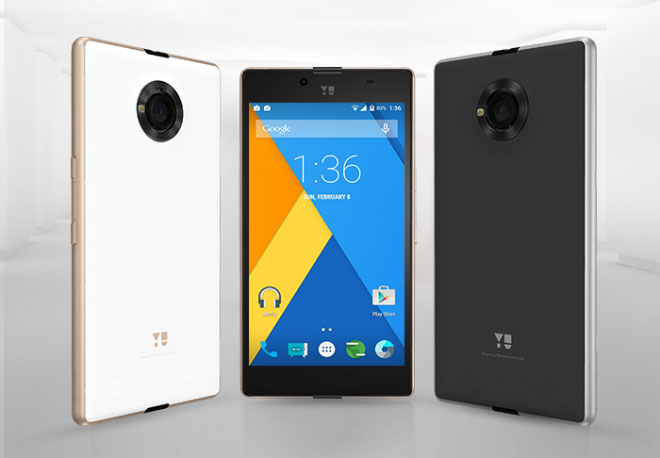 Despite the entry level pricing, the Yuphoria does pack in a lot of features, including a metal body, 720p display, Snapdragon 410 processor, 2GB RAM, and 8 megapixel camera, not to mention Cyanogen OS 12 that comes out of the box. But all of that’s on paper. Let’s see what it’s like in the real world.

The Yuphoria comes in a simple brown box that contains the phone, a charger rated at 5V/1.5A, a USB cable, the battery, screen protector, cleaning cloth, and a headset that looks remarkably similar to the Apple EarPods. The phone supports QuickCharge 1.0 although the charger doesn’t exactly specify whether it supports the feature.

One of the major features of the Yuphoria is the metal body. The phone has a stainless steel frame around the sides but with a plastic back cover. The design of the phone looks remarkably similar to the Lumia 925 and to some extent, the Lumia 830.

On the front of the phone is the display under Corning Gorilla Glass 3. Above it is the front facing camera and earpiece. The Yuphoria does not have a notification LED. Also, unlike the Yureka, there are no physical navigation controls here.

On the right side are the volume control buttons with the power button in the center. The buttons are located within reach but it takes getting used to to the position of the power button and you have to run your thumb around a bit before location it without looking at it. On the top is the headphone jack. On the bottom is the microUSB port.

On the back of the phone is the 8 megapixel camera lens with an LED flash and near the bottom is the single loudspeaker. The back cover is removable and underneath is the 2230 mAh removable battery, two micro SIM card slots and one microSD card slot.

The build quality of the phone is shoddy at best. The metal feels smooth with a good texture but that’s pretty much the only good part. The back cover feels cheap and does not fit the phone properly, leaving gaps around the corners (see above). It also does not lie flat on the back and is slightly raised, so you feel the edges around the sides. The plastic bits around the ports and the camera lens look exceptionally cheap and tacky. Even the glossy volume buttons look bad. The printed logo on the back also makes it look like a cheap knockoff rather than the original.

So while it’s commendable that YU decided to offer metal body at this price, the rest of the build quality, fit and finish, and attention to detail leaves a lot to be desired.

The Yuphoria has a 5.0-inch, 1280×720 resolution IPS panel. The image quality of the display is decent. It’s reasonably sharp with good colors and viewing angles. There is, however, a slight red tint to the display.

The bigger issue is the touch response of the display. Due to some multi-touch issue, it’s nearly impossible to type quickly on the phone. If you type at any appreciable speed, the phone quickly loses track of which key you’re pressing and either ignores your inputs altogether or presses some random key. Even with the best of auto-correction there is no way to overcome this issue. For someone like me who types a lot, the Yuphoria is pretty much unusable in its current state.

The Yuphoria runs on Qualcomm Snapdragon 410 MSM8916, with quad-core Cortex-A53 CPU clocked at 1.2GHz and Adreno 306 GPU. There is also 2GB of RAM and 16GB internal storage (11.83GB available to user) with microSD support. The phone does not support USB On-The-Go devices. On the connectivity side there’s LTE, Wi-Fi 802.11n, Bluetooth 4.0, and GPS.

On the software side, the phone is running Cyanogen OS 12, which is based on Android 5.0 Lollipop. The OS looks very close to stock Android but has a ton of useful features, such as built-in optional Truecaller integration, double tap to wake and sleep, a screen recording app, and the ability to customize practically every aspect of the UI, among others. There is also a very effective theme engine pre-installed and with the Yuphoria, not only can you adjust the look of the entire OS but also have individual look setup for each of the apps. I personally think the default theme that looks like stock Android Lollipop looks the best but your mileage may vary, which is pretty much why the theme support exists.

The UI performance on the Yuphoria was quite good. The OS has been optimized well for the hardware and despite the modest specifications of the Snapdragon 410 you are never really felt lacking for power, with smooth scrolling and quick launching and multitasking of apps. Even games run fine with minimal lag. The 2GB RAM definitely helps, and is a major advantage over similarly priced phones such as the Moto E 2nd Gen and the Xiaomi Redmi 2, both of which have 1GB RAM. More RAM allows running more apps in the background and more tabs in Chrome without slowing the phone down.

The multimedia performance was a mixed bag. The display is fine for watching videos and the loudspeaker is sufficiently loud. The phone also plays multiple formats and audio codecs like AC3 out of the box. The problem is with the headphone output, which is really bad. The audio sounds completely flat and almost turns monophonic as you increase the volume. And this is with proper high quality headphones and not the supplied earphones.

The Yuphoria has an 8 megapixel camera on the back with single LED flash and 1080p video recording, The image quality is nothing to write home about. During daylight you get some decent looking images, although it can never seem to get the exposure right. In low light it tends to mess the white balance quite often, especially if you use the flash which makes the image too warm. Indoor images only look decent if there’s plenty of light in the room or else the quality falls apart quickly. The 1080p video isn’t spectacular either. Overall, a very mediocre camera.

The Yuphoria has a 2230 mAh battery. We have come to expect excellent battery life from Snapdragon 410 devices, which is why it was disappointing to see Yuphoria return less than impressive results. It still manages to last 8-10 hours on a single charge, with about 3-4 hours of on screen time but the other other phones in its price range definitely do better.

As for the charging speed, the phone managed to go to about 25% from 1% in about 15 minutes, with 50% mark coming in around 40 minutes mark and full charge taking just over an hour and a half. These aren’t really impressive numbers and not what we usually see from QuickCharge devices, so it’s likely the supplied charger does not support the specification. Unfortunately, I did not have another QuickCharge supporting charger at hand to test but the phone took almost the same time to charge with a standard 5V/2A charger.

The YU Yuphoria is priced at Rs. 6,999. That’s an impressive price point, especially considering the specs of the device. Unfortunately, the Yuphoria fails to impress when it comes to actual real-world usage. The phone has decent design and display, and the features and performance of the Cyanogen OS 12 is also quite good. But the phone suffers from poor build quality and attention to detail, touchscreen issues, a fairly mediocre camera, average battery life, and poor headphone audio quality. Sure, some of these things can be fixed with a software update, but as it stands now, there are too many issues to recommend the phone to someone, especially with better options on the market, such as the Xiaomi Redmi 2 or the Lenovo A6000 Plus, at the same price.