The ad revenue of the third most popular social networking website is expected to reach $582.8 million by the end of this year, out of which $308.9 million are anticipated to come from mobile ads. However, the figures are bound to change in 2014 as analysts predict the revenues to reach $1 billion. 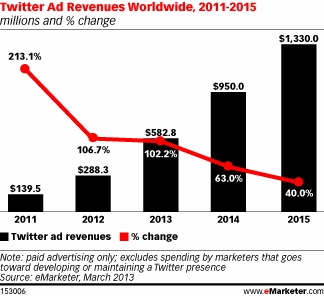 Twitter’s revenue in 2015 is seen to reach $1.33 billion, a 33% hike from the previous year. The social networks targeted marketing and its improved reach is said to be attracting advertisers and the recently launched advertisement API also allows the advertisers to reach out audiences with more relevant ads.