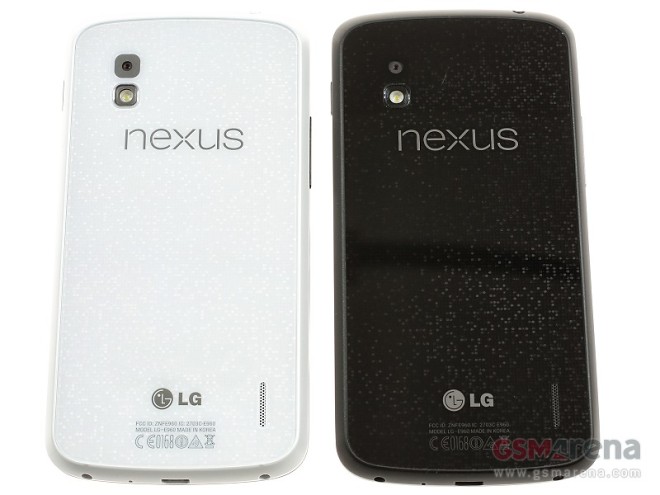 The phone is definitely a looker with the all-white back and sides but retains the solid black all-glass front of the black Nexus 4. When compared side by side, the two, although identical, look different.

We’ve whipped up a hands-on video for your viewing pleasure, check it out.

The white Nexus 4 has a few different attributes compared to its sibling. First off, the retail box has a white-colored outer sleeve compared to the black one of the regular Nexus 4.

The retail boxes side by side

Second the back panel features two, embedded in the plastic, tiny humps on each side so when you lay the phone flat it won’t muffle the speaker. The plastic frame of the phone, which keeps both glass pieces in check, feels plasticky and glossy on the white Nexus 4 and lacks the rubber, soft-touch feel of the black one.

We received a Google-made official bumper with the white Nexus 4. It’s meant to protect the device against accidental drops and only covers the sides of the device, leaving the front and back glass panels in plain sight.

The bumper is rather thick and has a two-fold layout – one made out of silver-colored plastic and the other out of white rubber. It features its own dedicated buttons, which match the original ones on the Nexus 4.

The white Nexus 4 with the bumper