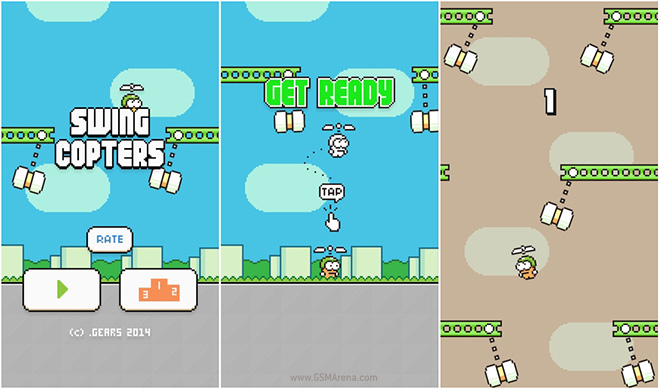 Swing Copters is yet another masocore game from the evil mind of Dong Nguyen. Except this time it’s supposedly even more difficult. Because that’s what was lacking last time. More difficulty. Anyway, let’s see what this one feels like (other than painful).

Update: The game has received an update that makes it considerably easier. What lies below is the review of the original game.

Swing Copters is a simple arcade game with one touch control that does just one thing. Your character is strapped to a propeller hat that not just goes up but also sideways. You can tap on the screen to make him change direction.

While going up you have to fly between the narrow gaps in the metal beams. As if that wasn’t hard enough, you also have hammers swinging sideways that you have to dodge. If you touch the beams, the hammers, or just ram into the side of the screen, you fall and the game is over.

The difficulty in the game mostly comes from the haphazard flight pattern of the propeller cap. Tapping on the screen makes it change direction but it also moves at a shocking speed in the other direction unless you tap the screen in time and manage to turn it back. The game is essentially about tapping the screen quickly enough to prevent the contraption from gaining enough sideways momentum, while going upwards and avoiding obstacles.

Swing Copters feels like it was designed specifically to be annoying. The difficulty exists not to complement the gameplay or test the player but simply for the sake of it. It’s like eating spicy food that is spicy just for the sake of it, not because the spice adds to the flavor.

I wouldn’t even call it frustratingly difficult. You get frustrated when the difficulty level is just above your skills and you can feel you can get there but can’t unless you try really hard. Flappy Bird was difficult but manageable. With some time you could easily attain a decent score unless you were really slow. Swing Copters gives you practically no hope, and you just sit there and look at what’s happening on the screen thinking, there is no point to this. The developer managed to strip whatever little depth Flappy Bird gameplay had and distilled it down to just pure difficulty. It’s like concentrated ghost pepper sauce; it just exists to cause pain and there is no enjoyment to be had with it.

Admittedly, some people have managed to score double digit scores. I guess with some really fast reflexes, god level precision and a fistful of cocaine, you can manage to go beyond 2 points. But most people shouldn’t have to put themselves through this ordeal of a game.

One thing I particularly disliked about the game is the time gap between dying and playing again. It seems like it’s about 3 seconds but that feels like an eternity when you want to just quickly try again.

Not much to say here. Simple 8-bit pixel graphics that get the job done. The game looks okay on iPhone and Android but is hilariously bad on tablets as it just stretches everything without even the slightest bit of optimization. The ads also make you want to poke your eyes out but can thankfully be disabled on iOS by paying a dollar.

Sound isn’t much either, and the developer has again gone with simple chiptune sounds that go with the 8-bit graphics.

Swing Copters is a game designed with just one goal in mind: to be difficult. It’s not entertaining and it’s definitely not fun (you know, the kind of things people expect from games). It feels like it’s made purely to annoy you and succeeds spectacularly at that. If you want to play a ‘game’ which constantly begs you to uninstall it or throw your phone out the window, then you can give this a try. If you want a ‘game’ with the depth of a teaspoon, download it right now. Only good thing about it is that it’s free but I still feel like asking for my money back for the few minutes I spent playing it.

Rating: 1/10
Pros: It’s free
Cons: Gameplay designed purely to frustrate rather than be enjoyable or even playable, poorly optimized graphics for tablets, obnoxious ads on free version, takes too long between restarts