Normally, it goes like this – a cool product enters the market and the crafty guys from ifixit take its shiny new body to pieces and expose every chip hiding inside. Well that didn’t happen with the Samsung Galaxy Note, so the Koreans took it upon them to perform the task.

Samsung has provided detailed descriptions of all the important Galaxy Note functional elements. You should keep in mind that what we have here is the US version of the Note, featuring a Qualcomm chipset and LTE, instead of Exynos and HSPA+. 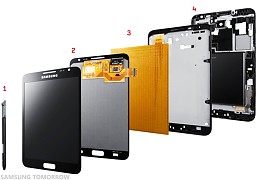 Here’s the Galaxy Note breakdown, as provided by Samsung:

1. S Pen
What would the GALAXY Note be without the S Pen? Still a pretty awesome phone, but that’s not the point.

The S-Pen uses electromagnetic induction technology and has pressure sensitivity equal to a regular pen. Your input on the screen varies with the amount of pressure you put, making it a seamless re-creation of writing with an actual pen.

The digitizer interacts with the S-Pen to sense the pen-tip’s location and the amount of pressure. By establishing an electromagnetic field, it blocks the noise and magnetism through the shield plate.

The bracket is like the Note’s backbone, holding together all the custom parts to maximize space efficiency.

With over 1000 different parts included in the mainboard, it fully utilizes Samsung’s integration technology.

The area that stores a variety of antennae and wires.