The iFixit guys have no mercy – the new Samsung Galaxy Note 10.1 couldn’t even go a week before being torn to pieces for the greater good. It didn’t put up much of a fight (and that’s a good thing) as there are only a few Philips screws and clips standing in your way when you need to open the tablet. 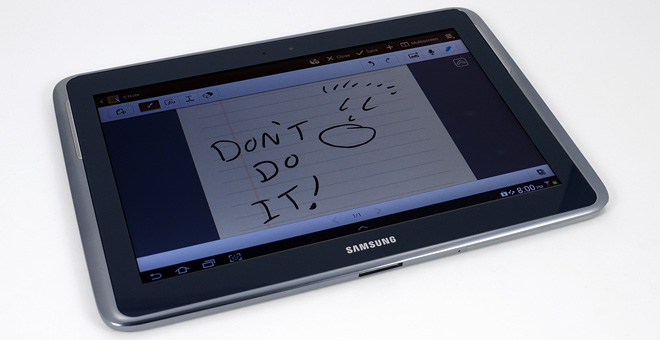 From then on things are pretty easy to detach. There are some oddities (the vibration motor is hooked up to the microSD card slot assembly), but the front and back cameras are separate components, so you can swap them out one at a time.

iFixit found a Wolfson WM1811AE audio chip, the same one as on the Galaxy S III, which did very well in our audio quality test. The Galaxy Note 10.1 also packs a dual digitizer, which helps out when you run apps in split-screen mode. Another interesting thing to note is that the 7000mAh (25.9Wh) battery weighs 136g or 23% of the total weight of the device.

The final reparability score of the S Pen-enabled tablet was 8 out of 10, meaning it’s easy to repair though there were a few components that had a bit too much glue on them.

You can view the step by step disassembly process over at iFixit or just look at all the gory, electronic details in the many photographs they took of the Galaxy Note 10.1′s internals.