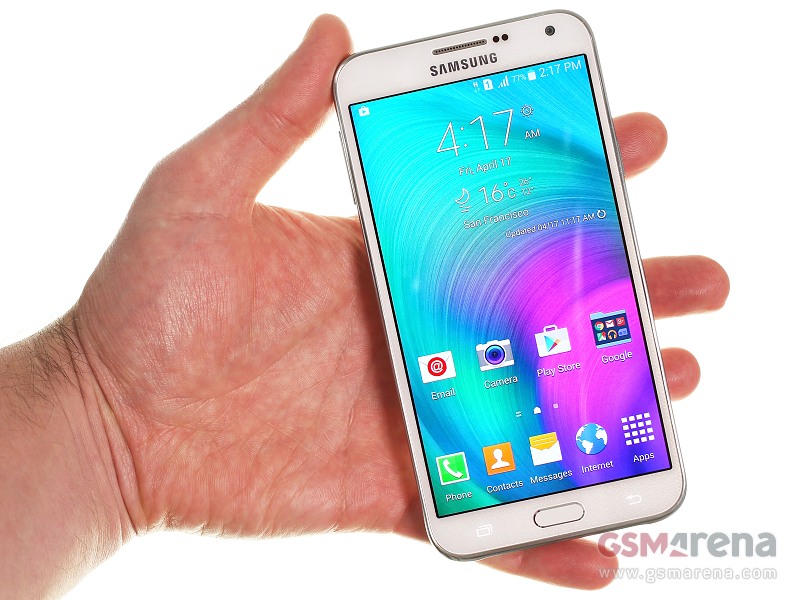 Now, there might be those, who will call the Galaxy E7 the poor man’s Galaxy A7, but just because it’s more affordable, doesn’t automatically mean the E7 is without merit. On the contrary.

True, the E7 is powered by an inferior chipset, namely the Snapdragon 410, as opposed to the Snapdragon 615 in the A7. But the same 2GB of RAM are on board and storage isn’t too shabby either at 16GB, expandable too. The 5.5-inch display is of the 720p variety, instead of being FullHD, but it is Super AMOLED nonetheless for that extra punch.

Designwise, the Galaxy E7 is an A7 with its corners a bit more rounded, and it’s unmistakably Samsung. What the E7 has lost during the cuts to meet the budget is the metal frame surrounding the device, and while it looks the part, it’s actually made of plastic. The back is plastic too, but it’s soft and matte and is very pleasant to the touch while keeping fingerprints away.

Samsung Galaxy E7 in our studio

The dual-SIM smartphone fits in pretty much the same footprint as the Galaxy A7, measures 151.3 x 77.2 x 7.3 mm and weighs 141g, exactly as much as the premium offering. It is a whole millimeter thicker, but at 7.3mm you can’t really call it thick, and it certainly doesn’t feel so. Mind you, it packs a significantly larger battery, rated at 2,950mAh.

A minor disappointment is the OS that the E7 boots, which is still Android 4.4.4 Kitkat. Hopefully, Samsung is working on an update and will release it in the near future.

There’s TouchWiz on top of Google’s OS, naturally, but you only get a handful of pre-installed apps, so the E7 is remarkably light on bloatware. Actually most of the apps that come bundled are Google’s basics (Chrome, Gmail, Drive and the lot), and not ones made by Samsung.

We’re already working on the detailed review, which should be out next week. Meanwhile, you can check out our brief hands-on video below.