As it often happens in the mobile world, the Android version is late, more than two years late this time. Still, it’s finally here and since the iOS version of the game was well received back when it came out we decided to take the Android version for a spin and see how it fares.

The story of the game is based on the movie. A bunch of elite warriors have been sent to a game preserve except they are the prey and not the hunters. The hunters are the Predators, which you will be controlling in this game.

The main campaign in Predators is split up in 31 missions. But before you get to those, you start out with a mini mission, where you play as a fully armed and trained Predators out to get the humans. It’s likely that you will lose easily in this mission because of the sheer number of enemies attacking you but that’s on purpose. Even if you manage to survive, the game ends abruptly. 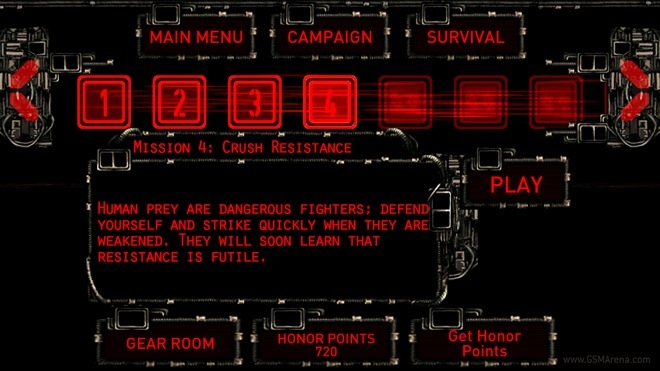 After that the real game begins. You start with the first mission, where you control a novice Predator. With each successive mission, you learn a new ability, such as basic attacks, blocking, combo attacks, weapons and special abilities, such as cloaking and thermal vision.

As you play more missions, you also collect more weapons, which go in your arsenal and you can switch between them during the game. You also come across elite members of the human community, whose heads you have to collect, which are then proudly displayed in your trophy room. 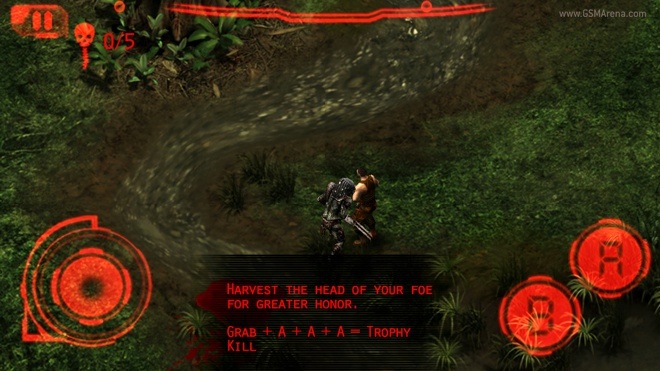 The gameplay is basic hack and slash action. You tap the attack button to swipe at your enemies with your gigantic claws. You can use combo moves, involving pressing the attack button a certain number of times or combining the attack and block buttons to unleash deadlier combos. At times it is necessary to pull off a combo, such as when collecting the heads of elite enemies. One of the combos is stabbing your enemy, raising him off the ground and then pulling his head out, spine dangling merrily below. 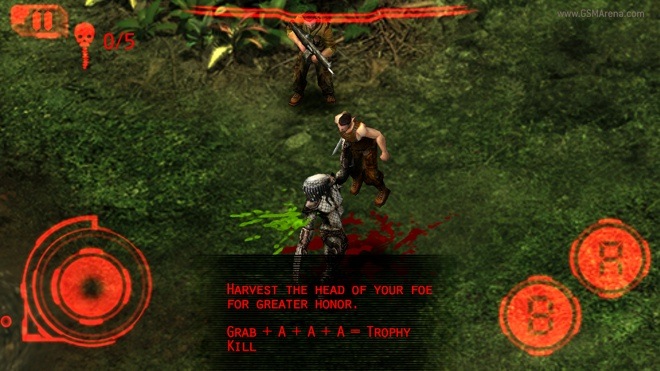 At times you’ll have to use your special abilities, such as cloaking or thermal vision. Cloaking lets you sneak up on your enemies but it does not work if you wade into water or if it is raining. Thermal vision lets you spot the elite enemies among the regular ones. All special abilities use your energy, which means they last a while and then turn off temporarily until your energy meter fills up. 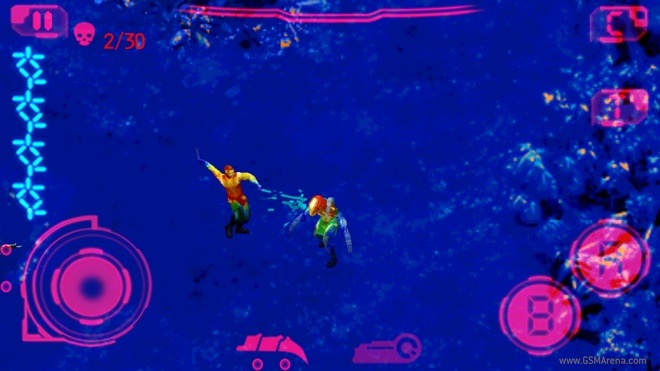 You also have a health meter up top. Normally the Predators can take a decent amount of damage but when too many enemies gang up on your health can diminish quickly, at which point it’s time to run for the hills till your health regenerates.

Enemies appear from all sides of the screen and you can see indicators as to where they are coming from. They either use melee weapons or shoot from a distance with their guns. The melee guys come towards you voluntarily to rid themselves of pesky things such as intestines and blood. The shooters will often run away at times, so you have to chase them and then stab them repeatedly for making you run around so much.

One of the weapons you get in the game is a plasma gun. The game doesn’t let you shoot manually but automatically targets the nearest enemy. Unfortunately, the targeting process is so slow the humans die of old age while you stand there waiting for the triangle to appear over their head. You can also get killed before you fire a single shot. Also, it’s not very powerful.

Fortunately, you can upgrade your weapons. As you kill enemies and win games, you acquire honor points, which you can spend on making the weapons faster and more powerful. If you don’t have enough points, you can purchase them through the game’s in-app purchasing system by paying real money.

Overall gameplay in Predators is fun. It’s not often you get to play as the bad guy and kill humans for a change. Also, the gory action is very satisfying. Having said that, it doesn’t take a very long time for it to become stale. There is not a huge variety in terms of gameplay here and the relentless button mashing becomes tiring after a while. Until then, however, you will find yourself enjoying a lot.

Predators uses a 2D landscape with 3D characters. The visuals are decent but there is not much variety in the arenas, which further intensifies the feeling of doing the same thing again and again, which brings about the aforementioned staleness after a while. Also, unless you have a tablet, the characters on the screen will be a bit small to make out the details. 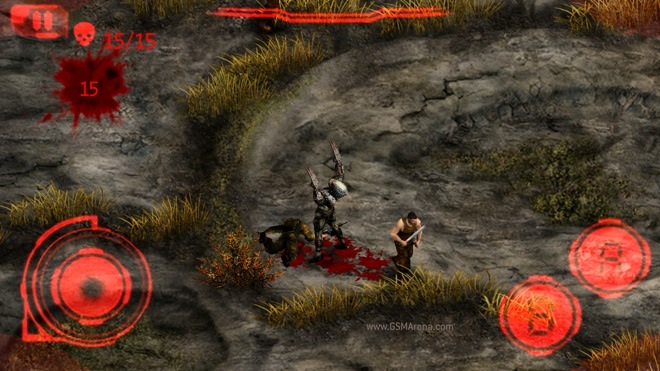 The game is optimized for NVIDIA Tegra hardware but honestly, I did not see any difference between the visuals on Tegra hardware and other devices. The controls did appear strangely small on some of the devices but that’s probably just another bug. Actually, there is not much need to do any optimization in this game. Since the visuals are so simple, even something as old as the Nexus S can run it fine.

In terms of sound, the game employs the usual creepy/sinister background music one would expect from a Predators game. The sound effects were pretty good, especially the guttural roars of the Predator every time he ripped someone’s head off or successfully completed a mission.

There are a few technical issues with the Android version that need to be mentioned. First of all, there is a problem that prevents the game from starting. On certain devices the game will start downloading data when you launch it and then say ‘Download failed because you may not have purchased this app’. I faced this issues myself on one of the devices, even though I had purchased the game and it works fine on other Android devices.

The other issue is with the IAP. A lot of users are reporting that when you try to purchase additional honor points, you are charged money but no actual points are provided to you.

Lastly, this is an issue that I noticed on one of the devices I tried the game on, is the unresponsiveness of the controls. The virtual joystick control would often stop responding, which meant you were stuck in one position facing one direction. The game often requires you to make quick movements to save yourself so needless to say this bug is very annoying.

The developers of the game could have done a better job, considering they had over two years to make the Android port. Hopefully, they will release quick updates to solve this issue and refund those poor people who spent money on purchasing honor points.

Predators offers some simple yet enjoyable hack and slash action. The missions are short and easy to pick up and play and the game offers enough incentives to go through all 31 of them. It’s not something that you are likely to play for weeks after you purchase it because the gameplay doesn’t stay fresh for long but for the time it lasts, Predators is pretty fun.