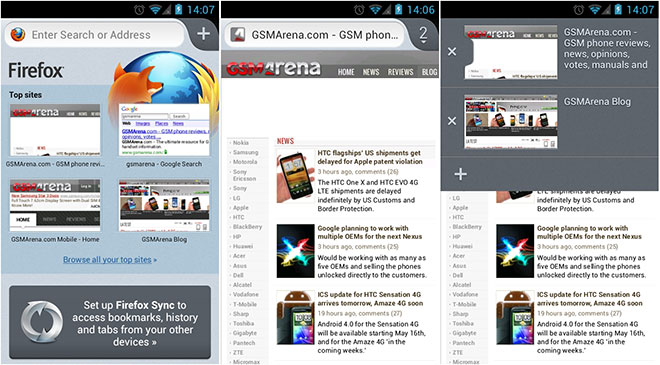 Other big change is the new UI, which looks a lot better. It has what Mozilla calls the ‘Awesome Screen’. It’s very similar to the screen you see in Chrome for Android, with the address bar at the top, thumbnails for frequently visited sites below and right at the bottom a list of recently closed tabs.

The address bar lets you search directly. As you type, you will see a bunch of search engines below, such as Google, Amazon, etc. You can type and then click on one of these to search on that particular site. I didn’t like the way the Google search results are displayed, though. Unlike the touch optimized version of Google Search that you see on the stock browser, Chrome and Dolphin HD, Firefox shows the standard mobile version with those really tiny links that you usually see in Opera Mobile.

The browser performance has improved considerably. It’s now a lot smoother and faster. I actually liked the scrolling on Firefox compared to Chrome as it was a bit smoother. Firefox also has no trouble keeping multiple tabs in memory, unlike Chrome, which starts refreshing older tabs the moment you open more than a couple. Firefox uses the Chrome-style bloated fonts for easier reading but sometimes goes a bit too far and makes them look a bit weird, something that Chrome does not. It also failed to properly display Typekit fonts on some sites.

Firefox lacks the menus that appeared from the sides of the screen. The new version is optimized for Android 4.0, so it shows an Action Overflow button on the top right on phones with no menu button, such as the Galaxy Nexus and the HTC One-series phones, and hides it on older phones.

Firefox finally adds support for Adobe Flash Player, although with most of the content on the web now slowly shifting to HTML5 and companies like Google completely removing Flash from Chrome, it might be a bit late to the party.

We ran some benchmark on Firefox and compared the scores to other popular Android browsers, including Chrome, Dolphin HD, Opera and of course, the stock Android browser. The benchmarks were run on a Nexus S running Android 4.0.4, which is currently the latest version of Android.

As you can see from the scores, Firefox manages to keep up with the other browsers in Sunspider and HTML5test but posts a significantly lower score in BrowserMark, despite running the test multiple times. Chrome, just like its desktop counterpart, is the fastest here, and is more than twice as fast in BrowserMark compared to Firefox 12. It must be noted here that the Chrome, Dolphin HD and the stock Android browser are based on the WebKit engine, whereas Firefox uses Gecko engine and Opera uses Presto. Also, both Firefox and Chrome are in beta stages and their performance could improve in the final version.

You can try the new Firefox for Android Beta for yourself by clicking here. It works on Android phones running 2.2 and above. A tablet optimized version isn’t out yet but is in the works. Click here for the change log for the new version.