The last one, Modern Combat 3: Fallen Nation was a particularly good game and with the latest one, Modern Combat 4: Zero Hour, Gameloft seems to have turned every dial to eleven to produce, at least on paper, one of the best first person shooters on the mobile platform. But does it actually deliver where it counts? Let’s find out.

The United States is under a terrorist attack and the terrorist group in question is being led by Edward Page, a former American soldier who has since then seemingly betrayed his country to wipe out the corruption within America. You get to play as American soldiers fighting this terrorism and at times as Page himself, watching the story unfold from the other side. The story is not much, really, and it’s hard to get involved with any of the characters.

Modern Combat 4 for most parts is a first person shooter but also includes other gameplay elements that we have seen in recent times, such as guiding an unmanned vehicle or directing drone attacks onto enemies. Other than that, however, it’s your usual run and gun action, occasionally separated by sniping, rocket launching and vehicle sequences. 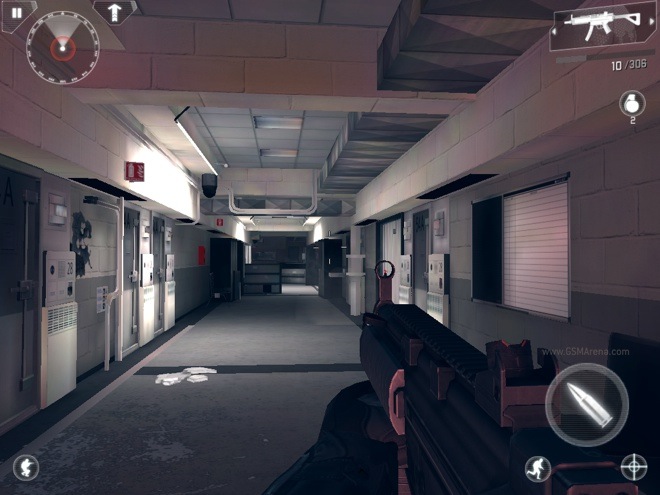 The action in the game has a very mature and grown up feel to it, which makes it stand out over most mobile shooters out there. It’s hard to tell sometimes that you’re playing a mobile game and not a console game. Granted, not all of the missions make complete sense and a lot of situations in the game seem to be there just for the sake of it, or to make it seem more like a console game, but the end result is very impressive. 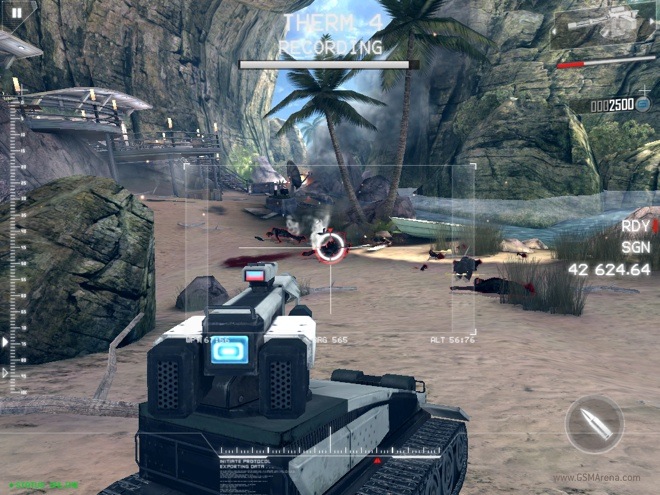 Most of the missions will have you running around with at least one other team member by your side. The AI team mates do a good job taking down enemies when you are not around and don’t just stand there and absorb bullets. The AI is not exceptionally bright and often don’t turn around when you’re besides them but they make good use of cover and tend to spread out to maximize the damage. In turn, you too have to take cover, otherwise you won’t last five seconds in the battlefield. Considering this, the cover system is rather basic and you just have to move behind object and crouch down to reduce damage. 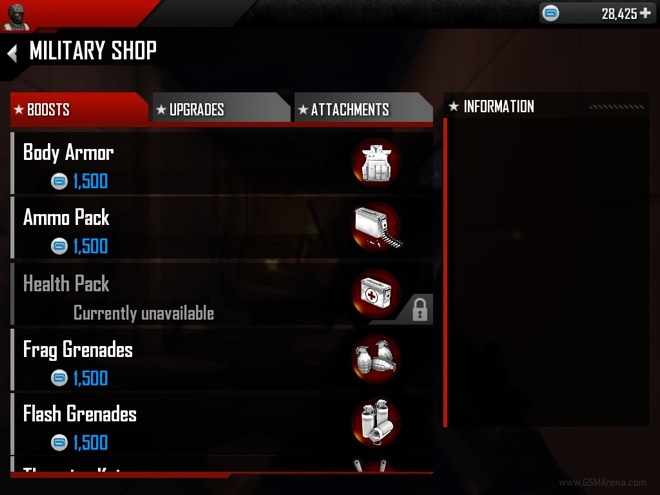 The game offers a lot of different weapons to choose from. You get your usual assortment of rifles, handguns, shotguns and grenades. When you get too close to an enemy, it automatically switches to a knife. You can carry three guns at a time, along with the grenades. You can also purchase additional items such as safety vests, health kits, grenades, etc. using the points you earn while playing the game. 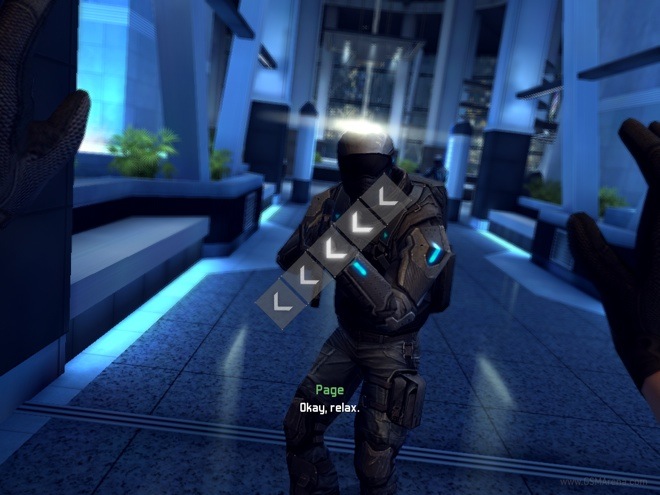 The game makes good use of the aforementioned gameplay elements to space things out, so you don’t feel like you’re constantly shooting at things. I mean, you still shoot at things, but events such as controlling UMVs are quite fun and make the game seem less repetitive. There are also some quick time events thrown in for good measure. Occasionally, during cut scenes, you will be attacked by an enemy, at which point a swipe command will appear on screen. Swipe immediately in the right direction and you pull off an instant kill. Fail, and you die and the game starts from the last checkpoint, which are always nearby. 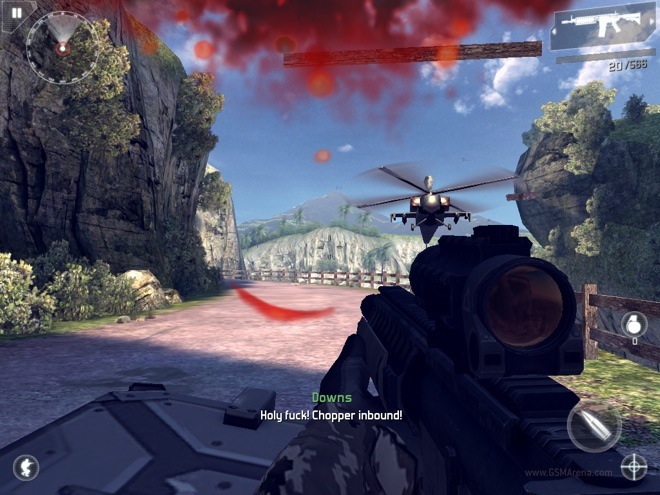 One major problem with the game, however, are the controls. Now this is not something exclusive to the game but more of a problem with shooters on touchscreen devices in general. The touch controls feel slow and unresponsive and at times are just hard to find when you’re not looking directly at them. It takes several hours to get used to them and even then you’d find yourself struggling in tight situations. Thankfully, Gameloft lets you customize the layout by letting you move them around and even increase their size by pinching. With a bit of experimentation you can get a playable layout but the controls still end up being the weakest link in the chain. 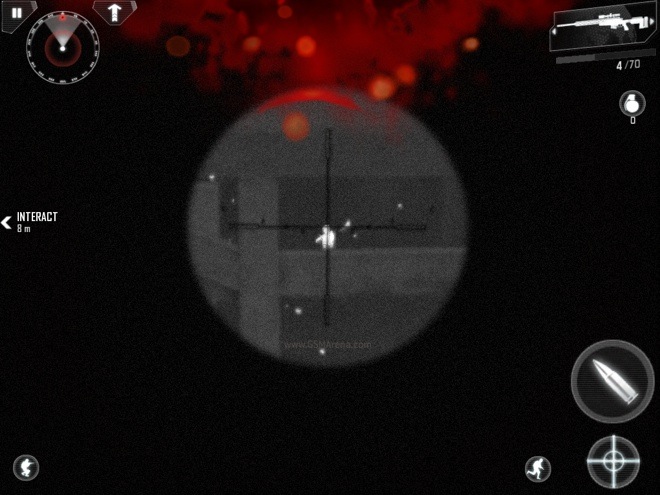 The controls also end up making the game a lot more difficult than it is. Had you been playing the game with a keyboard and mouse you’d probably breeze through the campaign in not more than a couple of hours but it would take you twice as much otherwise with the touch controls. The game offers many aids to help you out, by automatically snapping the crosshair at the nearest enemy, etc. but it still feels quite difficult, which can occasionally be quite frustrating. 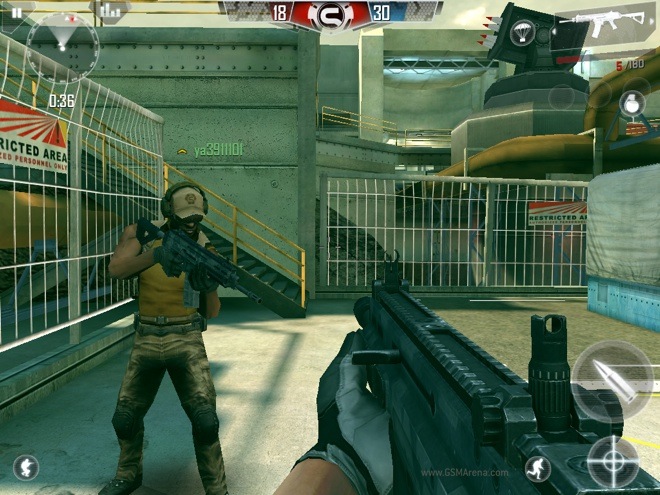 Gameloft has also built-in a multiplayer element into the game. You can either play over a local Wi-Fi network or use a Gameloft ID to play against people online. The multiplayer is quite fun, actually, and although you don’t have a lot of players online at the moment there are still enough for you to enjoy yourself when you get bored of shooting at AI soldiers. Also, the playing field seems to be level as seemingly everyone struggles with the controls, so you have a decent chance of getting a good score and a rank.

This is one area where Modern Combat 4 blows practically every mobile game out of the water. It looks absolutely, jaw-droppingly spectacular. The game is based on the Havok engine, which brings with it some incredible particle effects and rag doll physics, which makes the game look highly realistic. You also get the Battlefield 3/Frostbite 2-esque lens flare effect on the screen, which also looks nice without being too distracting. It’s insane how good the game looks at times and you just want to stop and stare and be amazed at how far technology has come in the past few years. 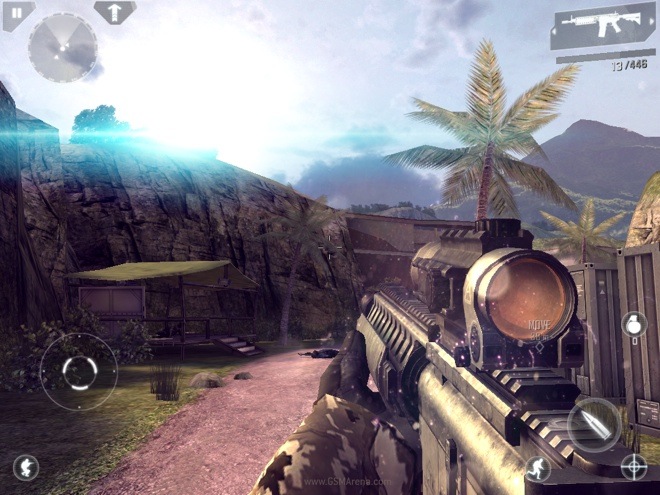 The sound is equally good in Modern Combat 4. The background music is gritty and exciting and the sound effects are all well done. The guns sound powerful and lethal and explosions can be daunting. Even the voice acting is done very well, although the dialogues themselves are often unnecessarily aggressive and seem to be trying too hard to appear tough.

In terms of production value, Modern Combat 4: Zero Hour can beat the pants off of most mobile and even some console games that have arrived this year. The game looks absolutely incredible and plays just like something you’d find on a console or a PC. Sure, the developers could have spent more time working on a better story and characters but despite that the game still manages to be quite enjoyable. Complementing the short but solid campaign is an enjoyable multiplayer mode as well, which you’ll find yourself playing days after the you’ve finished the single player mode.

The only thing holding this game back are the controls, which is largely the fault of the platform. But if you’re someone who has made peace with this shortcoming or can use a controller with your mobile device then it shouldn’t be too much of a concern.

Priced at at $6.99, Modern Combat 4: Zero Hour offers a lot of bang for your buck and is highly recommended for fans of first person shooters.