Madfinger Games’ first attempt at a first person zombie shooter was pretty successful, judging by the 18 million downloads across iOS and Android. Now they have announced a successor in the form of Dead Trigger 2, which takes a slightly new direction with gameplay and also features improved visuals over its predecessor. 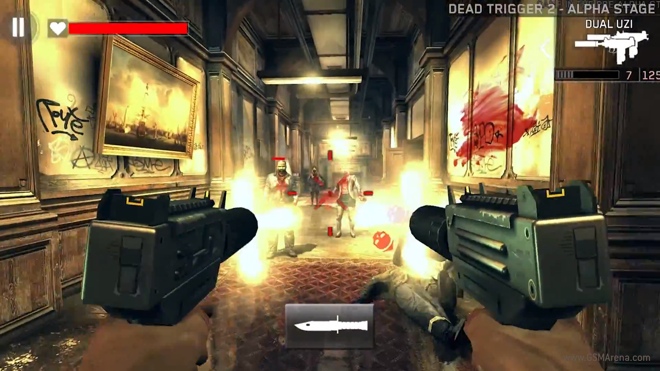 Unlike Dead Trigger, which was just a single player game, Dead Trigger 2 is actually a massively multiplayer online first person shooter. This means that you will be playing besides hundreds of other players in a common world against a common enemy. You do have your solo missions but you will also be fighting for a global mission together with other players. As players join in, the world keeps evolving and moves forward in time. So it starts off with the first few players and when new players join in later they continue from the point where the world currently has evolved to instead of starting over again.

Another improvement is in the visuals department. Dead Trigger was a pretty great looking game but Madfinger claims to have improved it even further with the addition of real time reflections in water, dynamic vegetation, cloth simulation and even and enhanced ragdolls. Unfortunately, if you’re on Android, these effects will only be limited to devices running NVIDIA Tegra 4 processors, with other devices getting a scaled back, more boring version of the game that roughly looks similar or worse than Dead Trigger regardless of whether or not your hardware is capable of running the visuals. This is similar to what Madfinger Games did with Dead Trigger and Tegra 3 and it wasn’t the best of decisions and the only purpose it serves is to promote devices running Tegra hardware.

Dead Trigger 2 will be launching on iOS and Android and Madfinger Games have also hinted at a possible release on Steam, Mac App Store and Facebook. For the full press release, check the link below.