iOS 7.1.2 has a bug in Calendar that shows wrong holidays in some regions

The latest version of Apple’s mobile operating system comes with a pretty odd bug. It turns out that for some regions, the Calendar app shows the wrong holidays. 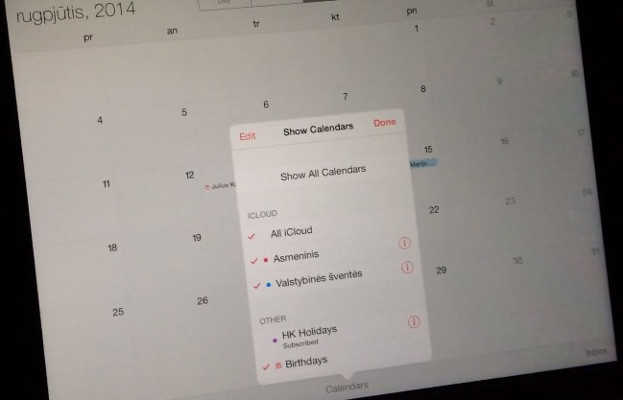 What actually happens is that the holidays from other regions are shown instead of the ones adequate for what your location is set to.

This bug has been discovered by an iOS device owner in Lithuania. After applying the update to iOS 7.1.2, which started going out earlier this week, he noticed that he was seeing the holidays for Hong Kong, Canada, or Mexico. This despite the fact that he had set Lithuania as his region.

The situation is clearly depicted in the image above, which is part of the video embedded below – posted by the aforementioned user who noticed the bug. As you can see, the Calendar app shows the month name in Lithuanian, but the holidays for Hong Kong.

In certain other regions everything is working perfectly, as portrayed in the latter part of the video. Setting your location to the US, the UK, or Russia presents the adequate holidays in Calendar.

The person who stumbled upon this behavior emailed Apple about it, and the company responded by acknowledging that there is a problem with Calendar in iOS 7.1.2. Apple engineers are currently working on fixing it, and the bug should be gone in the next iOS update. Though when that will come out is still a mystery.