Google recently updated the stock camera app in Android with a completely redesigned version. Unfortunately, the update got rid of half the features in the camera app, and it didn’t have a lot to begin with. 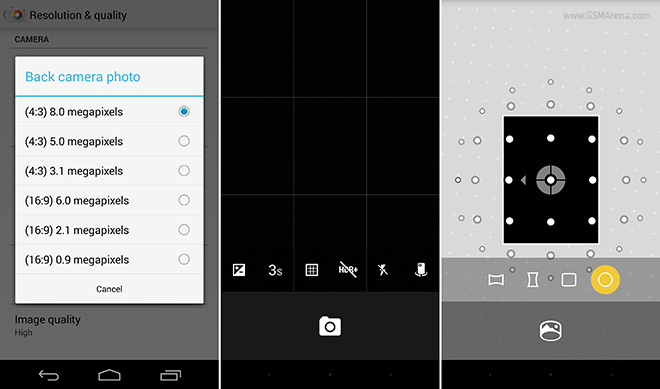 The latest update attempts to fix that but doesn’t really try too hard. One of the features that was taken away and is back now is self timer. You can now choose from 3 or 10 seconds timer options. The white balance option is still missing and you can forget about having things like ISO, shutter speed and metering options.

One change Google made in the new app was to show full 100% output from the image sensor in the viewfinder. This meant that phones with 4:3 sensor (which is almost all of them) would show a smaller preview than before with a large shutter button on the side. Those who are clueless about how sensors work complained about how the viewfinder was now smaller than before, even though it was actually showing them more area now than before. You can read through all the negative reviews for the app on the Play Store and see that 90% of the complaints are about the viewfinder.

So to appease the uninformed, Google has brought back the 16:9 crop as an option. You can now select it from the resolution settings and not only will it show a 16:9 preview, thereby taking up the entire screen (the shutter button becomes translucent) but unlike before, the images taken are also in 16:9 (and at a lower resolution) so at least you get what you see.

Other additions are some new panorama modes. If you go to the Panorama mode, you will find that other than the standard horizontal panorama, you can now also take a vertical one, square and circular panorama. Time taken to process these images, even on the Nexus 5, is still too large, though.

The update is now rolling out on the Play Store and should be available for download soon, if it’s not already.