Key-rings haven’t been the focal point of much innovation over the years but a new crowd-sourced campaign is aiming to change that. Dubbed GOkey the device brings a Bluetooth-enabled key locator, an external battery, a USB flash drive and a USB cable (or Lightning if that’s how you roll) into one.

The cool looking piece of tech has a battery of its own, which according to the manufacturer will provide enough juice for two hours of talk time for those emergency cases. It has a built-in cable (either microUSB or Lightning depending on the version) so you won’t need to carry that either.

Using that cable, GOkey can also be used for tethering your smartphone or tablet to your laptop or PC for both charging and data synchronization purposes.The device is Bluetooth-enabled so you can pair it with your phone and use it for finding your misplaced keys. To sweeten the pot even further there’s built in memory so GOkey can act as a standalone thumb drive – 8GB, 16GB or 32GB depending on the version you pick.

The campaign has achieved more than double its original $40,000 goal in just four days, but there are still enough units up for grabs on its Indiegogo page. 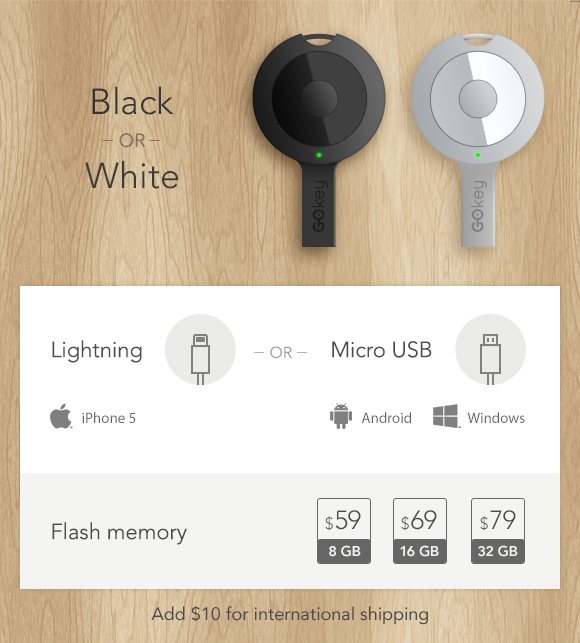 You can currently get an 8GB or 16GB unit for $49 (or $59 if you want it shipped internationally), while the 32GB version costs $59 ($69) for early adopters. There are also special laser engraved units and discounts if you get three units, if you want to pledge more.