NVidia’s Tegra 4 didn’t get the wide adoption the Tegra 3 saw and the company is already looking to 2014′s models. The Tegra 5 and the Tegra 4i already have certifications by AT&T and should bet certified by other carriers soon.

The Tegra 4i aims at the mid-range market and the first devices with it should be announced in Q1 and ship in Q2 (basically, we should see them at CES and MWC next year). NVidia’s CEO says people will be “delighted by the OEM that it comes from.” Still, it’s coming a little late since it was announced as far back as February this year.

The Tegra 4i is a mix between the Tegra 3 and the Tegra 4. It uses four Cortex-A9 CPU cores and a fifth power-saver core (similar to the Tegra 3) and packs a slightly cut down version of the Tegra 4 GPU (60 GPU cores instead of 72).

Note that this is a new revision of the A9 CPU core (the 2.3GHz clock speed also helps), which should provide 30-40% performance boost over current A9 designs and be more power-efficient than the A15s. Also, the A9 cores are smaller than the A15, which means smaller and cheaper chipsets. The Tegra 4i has an LTE modem built-in, so we can expect it to power mid-range, LTE-enabled phones and tablets next year.

The Tegra 5 will not come with a built-in modem, instead manufacturers will have to use an additional chip like NVidia’s Icera i500 (the same modem that’s in the 4i). Both the Tegra 5 and Icera i500 are certified by AT&T. 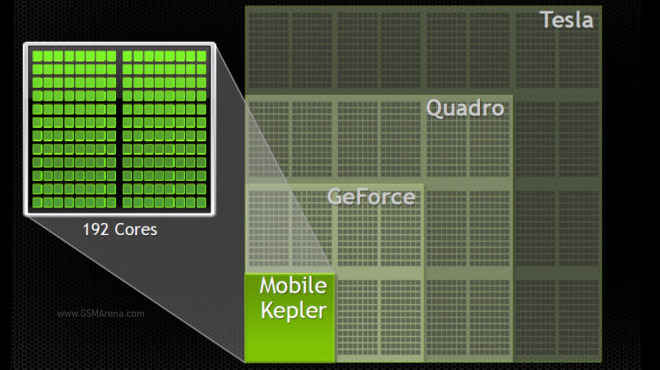 The Tegra 5 will use a Kepler-based GPU, that’s the tech NVidia uses for its desktop and mobile GeForce 6xx GPUs. This should bring massive graphics performance – we’ll see when the Tegra 5 devices are announced in Q1 next year (quite likely at the MWC again).