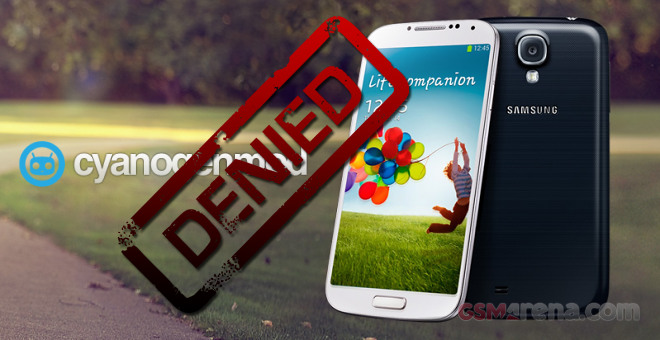 Not a single guy from the CyanogenMod team considers buying the device and give it a shot.

Nobody at Team Hacksung (the team behind Galaxy S2, Note, S3, Note2, G Tabs… official CM ports) plans to buy it, neither develop for it. There are two variants which will be a pain to maintain, [and] the bugs we have on the S3 will probably be there on S4, too (camera), and we all know Samsung ability to release sources while staying in line with mainline. Yes Qualcomm releases sources, but Exynos sources we had were far from [working on] actual Galaxy products. I’m pretty sure the same will happen for this one.

That’s a uniform “no” from us.

The CM guys are probably right to deny support for the Galaxy S4 since Samsung is so clumsy with the source files. After all, limited documentation prevents the development and no one would use a buggy custom ROM over the fully operational stock one.

And while the number of people wanting to buy Galaxy S4 with the idea to run stock Android on it is low enough not to affect the company’s sales targets, the attitude of the company to 3rd party developers is certainly not great.

Update:The CyanogenMod organization made a comment regarding device expectations:

Let’s start with the simplest form of this: CyanogenMod does not pre-announce support or lack of support for devices. Ever. Even for the Nexus 4, we did not announce support until a nightly build was available. Further, any announcement regarding the ‘dropping’ of device support will be communicated via this Google+ page, Twitter, Facebook, our blog, or a combination of those; it will not be something buried in a forum post.

This morning, a comment from a CM collaborator on XDA was taken to be as an ‘absolute’ in regards to support of the S4. He offered the opinion of four TeamHacksung maintainers, their frustrations and lack of interest in supporting the S4. What’s seemingly lost on those reading this is that his comments as an individual do not speak for CyanogenMod as an organization.

As for the team’s stance on the S4, there isn’t one at this time, and most definitely won’t be one before the device is sold at retail.

Anyway, Samsung most probably won’t release documentation for the Exynos processor, so the international Galaxy S4 is still a no-go for a CM version.