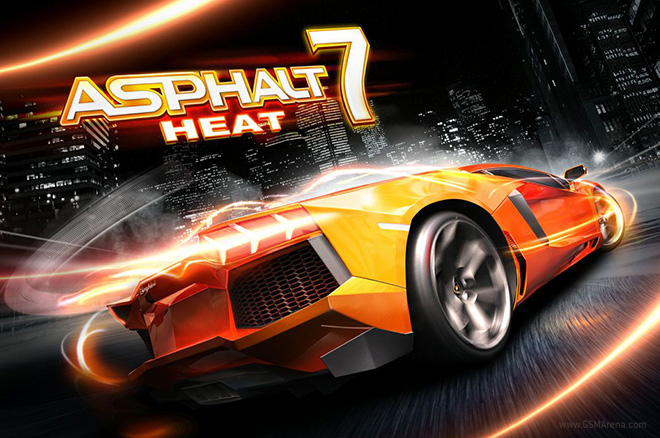 The latest iteration in the Asphalt series is Asphalt 7: Heat. The first time we got a glimpse of this game was in the promotional material for the Samsung Galaxy S III, although the game itself arrived on iOS first, as they usually do, and it’s only now after almost a months has it made an appearance on Android.

The gameplay in Asphalt 7 is very similar to its predecessor. The career mode has been split into thirteen cups, with each cup having multiple races of various types. In each race, depending upon your performance, you can earn up to three stars. Once you earn enough stars in the current cup, you unlock the next cup. 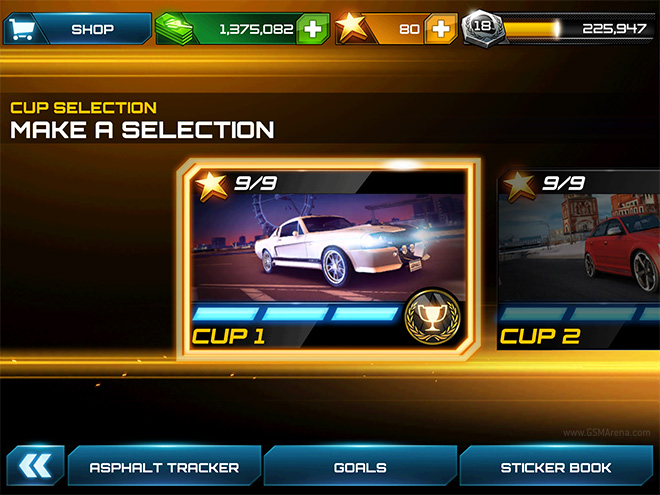 You have five basic types of races. There is the normal race, where you race against other cars and you have to be in the top three to win the race. Other race types include Elimination (the last car in each lap gets eliminated), Drift (drift as much as possible in a limited amount of time), Beat ‘em all (take down a certain number of cars), Old school arcade (race against the clock) and Paintjob (finish the race without damaging the car). 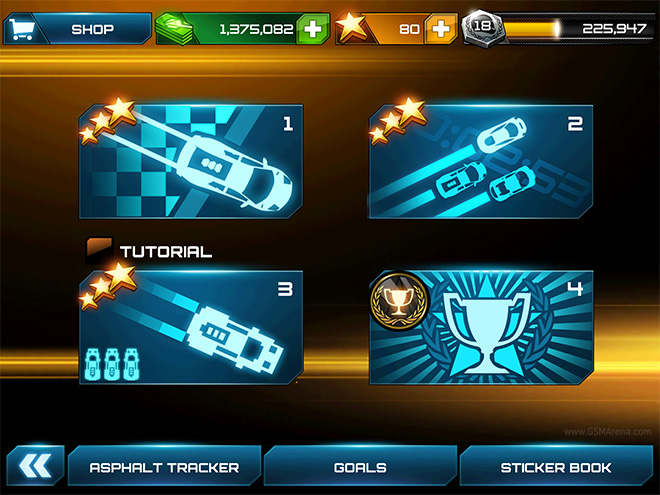 As you race, you will find cash and nitro boost on the track. You can also drift or drive dangerously to fill the nitro meter. You get three levels of nitro boost depending upon the amount nitro you have left. If you have the maximum amount, you get a super powered boost, which turns your screen blue. If you hit an enemy car while this mode is active, you automatically take down that car. It must be said though that in this mode, it does get a bit difficult to see where you’re going and what’s in your path as the screen becomes a bit too dark. And even though you are supposedly going fast it doesn’t feel any faster than the other boost modes.

A certain trivia mistake that I found in the game is the presence of nitro boost for the Tesla Roadster, which is an electric car. In real life Nitro boost only works with cars that have an internal combustion engine, but perhaps it was more fair this way.

As with the previous games in the series, the gameplay in Asphalt 7 is a lot of fun. Even though the basic premise has remained the same, the improved visuals and dynamics of the vehicles makes the game feel that much more real and closer to what you will find in games on the PC or the consoles.

The drifting in this game deserves special mention, as it is the most enjoyable activity you’ll have the chance of doing throughout the game. Drifting requires almost no effort at all to initiate. Just turn into the corner and tap the brake and the car’s rear end will stick out. You need to keep the accelerator pressed (if you have enabled manual accelerator) and just control the direction with the steering. If you turn too hard the car would turn 90 degrees and go straight into the side of the road. Too little and the car will straighten out and the drift will end.

Getting this just right requires a bit of practice initially but after that it’s an absolute blast. Once you get the hang of it, you will be hunting for corners to pull off a drift. Drifting also has it’s advantages, as it is a lot faster way of getting around tight bends than simply slowing down. You hardly lose any speed through the corner and as a bonus, you get a nice shot of nitro boost. 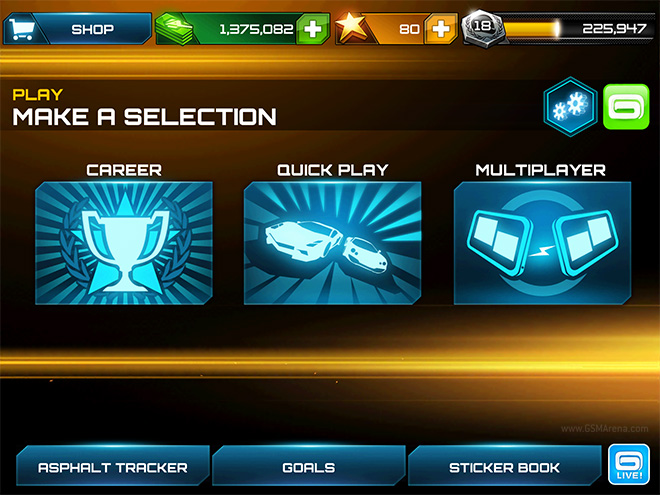 Along with the career mode, there is also a quick play mode and a multiplayer mode. The multiplayer mode lets you play online against others using Gameloft’s online service or you can also play locally over Bluetooth or Wi-Fi.

Visually Asphalt 7 is very impressive, a much better version of its predecessor. The environments are more richly detailed and the car models also look more real. The lighting in the game is also impressive and lens flare has been used to good effect. The car models are all very shiny and reflect the surroundings, such as the buildings on the side, the banners above and even the fireworks in a particular night level. The game also gives a great sense of speed, which is particularly impressive on the large screens of tablets. 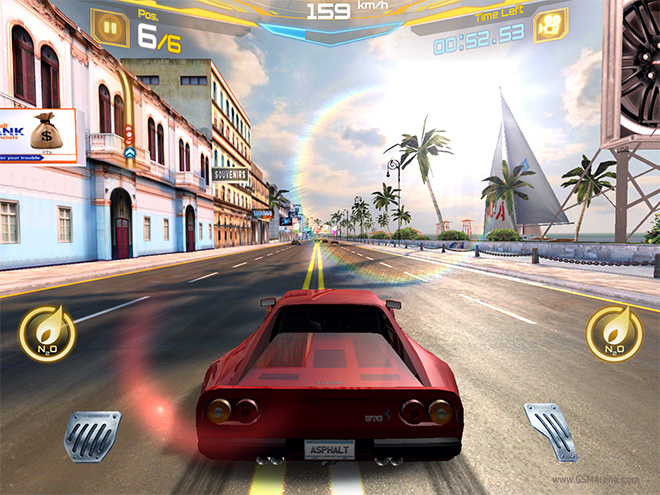 There are some other visual treats as well, such as the tires kicking off snow in one of the snow levels and the especially great looking smoke that emanates from the tires as you drift. The iOS version gets the full blown treatment but the Android version understandably has toned down visuals for the game to run well on multiple devices. The Android version also has issues on certain devices and does not run as smooth as it should. It would be wise to read the user reviews for your handset from others who have bought the game before you decide to spend on it. 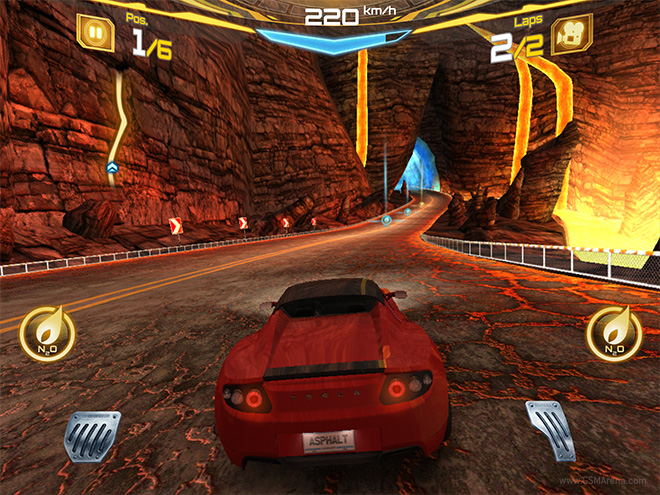 Asphalt 7 has 15 tracks, 10 of which are carried over from the previous games. It’s not a simple copy-paste job, though as the levels are noticeably different with new details and slightly updated routes to prevent the feeling of déjà vu. The five new tracks are great as well. 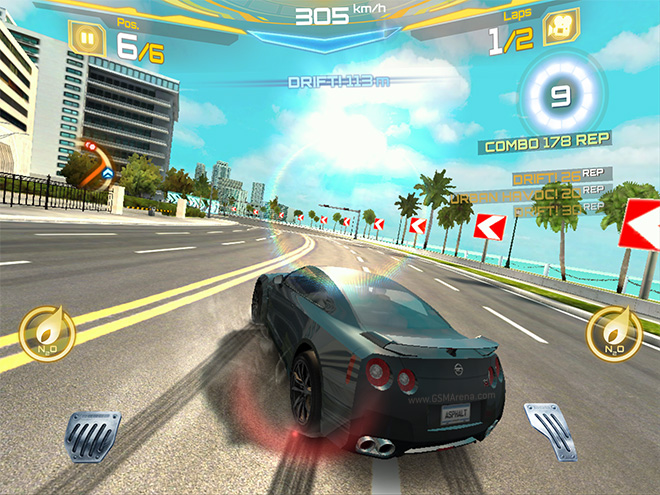 The cars have always been a strong point of the Asphalt series of games and once again Gameloft has managed to muster a great roster of cars for Asphalt 7. They range from the usual Fiats, Fords, Audis and BMWs to the more exotic Lamborghinis, Ferraris, Veyrons and even the Pagani Huayra. There is not a lot of difference between the way the cars drive though and most of them even sound the same. But it’s not a huge turn off and it’s still fun to drive around the track in your favorite car at breakneck speeds. 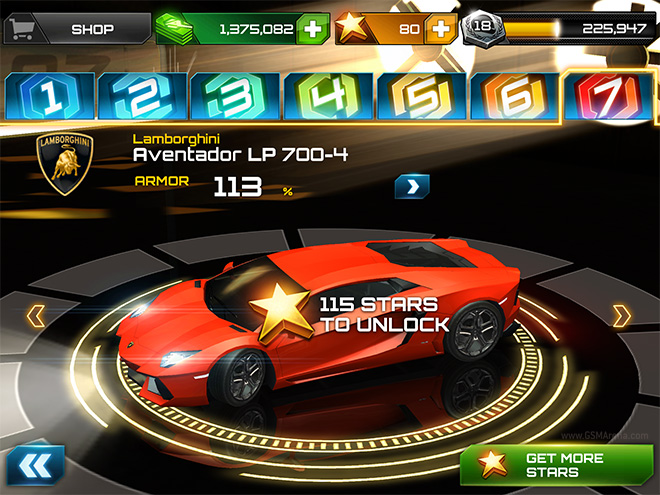 The only problem I have with the visuals is that there is no damage model for the cars, so no matter how much you bang them around they look the same at the end of the race as they did at the beginning. EA’s Real Racing 2, on the other hand, has cars that show minor damage in the form of broken bumpers. Even Colin McRae Rally on the now ancient N-Gage had a damage model for its cars, and a comprehensive one at that. Then again, these two games demand precise driving whereas in Asphalt 7 it’s all about having fun.

In terms of sound, Asphalt 7 impresses again with a superb dubstep soundtrack and incredible sounding car engines. The only fly in the ointment is the annoying announcer/co-driver, who has been carried over from the previous game. Thankfully, you can disable her voice completely.

Overall, Asphalt 7 is a treat on the senses and is definitely one of the best games around on mobile in this aspect.

As has become the norm these days, the cheaply priced Asphalt 7 comes with plenty of IAP or In-app purchasing options. You can either purchase more in game cash, which lets you purchase more vehicles and upgrade existing ones, or purchase stars, which lets you unlock more cups and vehicles. Thankfully, it never feels as if the game is keeping the best things locked away from you in order to milk more money and you can have plenty of fun without spending a single dime over the $0.99 initial purchase price. 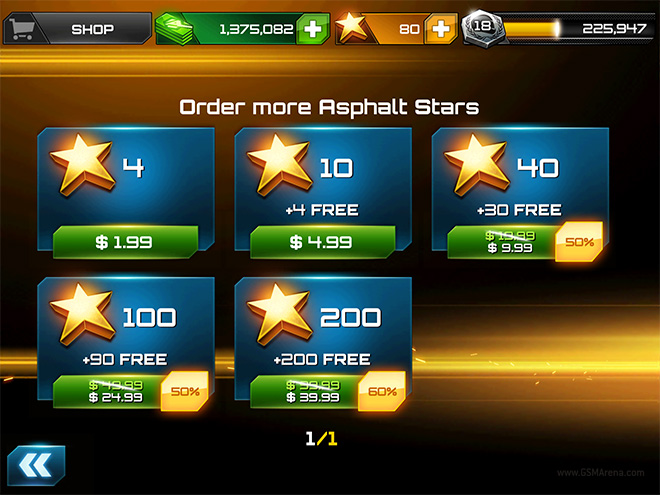 This pricing model is now starting to make a lot of sense, as it lets you play the game without spending a lot upfront. Unlike Dead Trigger, however, Asphalt 7 does not coerse you into spending by giving you only weak cars to play with. The initial cars are a bit slow but are still a lot of fun and the faster ones get unlocked pretty quickly. You can go through the entire game without spending anything extra and still have a lot of fun with it. 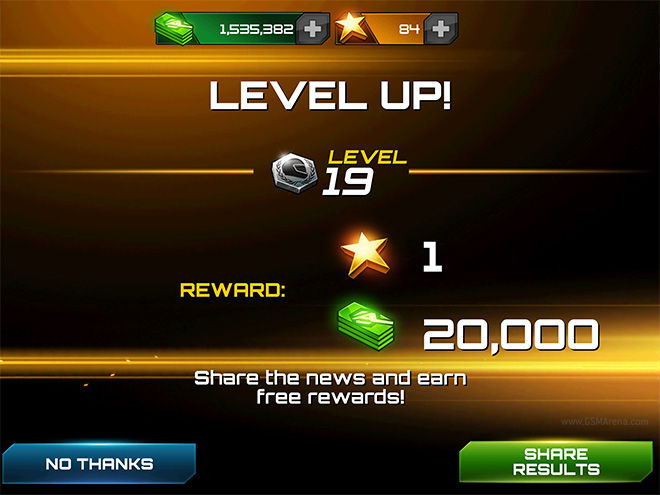 Now speaking about the social aspect of the game, the game lets you share your winnings on Facebook. Clicking on a button at the end of the race launches the Facebook app and then you can post your scores. Unfortunately, Asphalt 7 takes it a bit too far but prominently placing the button at the end of every race. The developers have also placed the sharing button where the Next button usually is, so when at the race you are quickly pressing some buttons to get to the next race you suddenly find yourself staring at the Facebook app because the developers swapped the buttons on the last stage and so instead of next you pressed share. To say that it’s frustrating would be putting it lightly.

Asphalt 7 Heat is a fantastic racing game that will have you playing till the battery runs dry. It’s exciting to play, great to look at and at $0.99 is price just right. There are some minor annoyances here and there. Also, the Android version is not as polished as the iOS version, but despite these niggles Asphalt 7: Heat manages to raise the bar for arcade racing games on mobile.