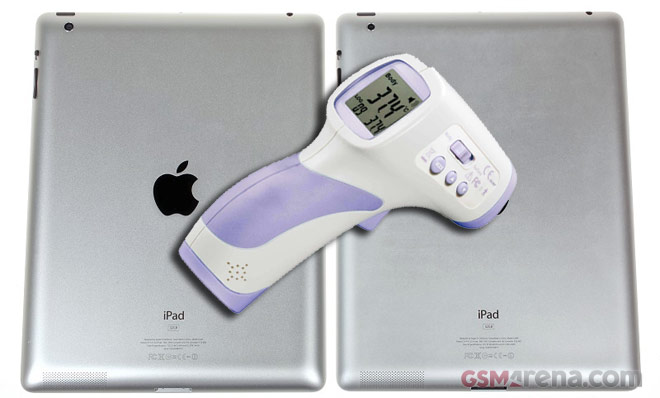 We were aiming to answer two questions – how hot does the new iPad get in regular usage and what is causing the supposed overheating issues. So here’s what we did – we placed the new Apple slate alongside its iPad 2 predecessor and started checking out how the two would react to various challenges.

The ambient temperature was just north of 22°C (72°F) and unsurprisingly the two slates weren’t any hotter when we woke them up from their sleep. We started the test by turning on the screen and leaving them just sit there idle.

Many point out that the increased resolution is one of the main causes for the higher temperatures generated by the new Apple iPad and there is obviously some truth to that. 55 minutes into the test, the new iPad had already reached 34.6°C (94.3°F), while the iPad 2 only got as hot as 29.7°C (85.5°F). At that point the temperatures of the two tablets stopped increasing, so we moved on to the next challenge.

The difference of just under 5°C is not too big a deal, but it’s certainly notable when you handle the two one after the other. Still, you most probably won’t mind holding the new iPad in your hands.

Next, we put the CPU under stress – both the A5 inside the iPad 2 and the A5X inside the new iPad have dual-core Cortex-A9 processors, so we expected to see a similar peak in the temperature of the two.

Then came the main suspect’s turn – the new quad-core GPU was most often quoted as the source of the problematic bit and our tests confirmed that it contributes quite a lot to the high temperature. The EpicCitadel demo was our first testing ground – it doesn’t support rendering in the new Retina resolution so the two slates were on even ground.

It took just over an hour for the temperatures to stabilize – the iPad 2 got to 31.7°C, while the new iPad temperature spiked to 38.3°C. At that point the latest iPad became slightly uncomfortable to hold, but still far from being a big issue.

Finally, we let the quad-core GPU unleash its full potential by running Infinity Blade II on the new iPad. About an hour later the new iPad reached 44.4°C(111.9°F) at its hottest point – it’s really better if you avoid holding it at the bottom left corner, where the chipset is located. It won’t burn you or anything, but it gets really uncomfortable.

The two neighboring corners went to 38.4°C (101.1°F) and the opposing one only reached 37.4°C (99.3°F), so you won’t necessary have to deal with the heat. The iPad 2 wasn’t included in this test as it is unable to render Retina resolution graphics.

So, in conclusion the issue does exist and the new iPad really goes a bit hotter than comfortable for holding. The peak temperature of the new slate is, according to our measures 12.7°C (26.1°F) higher than that of its predecessor and that’s a pretty major difference that you can easily feel with your hands. It might turn out to be an even bigger deal if you use it in warmer environment than ours or in direct sunlight.

On the other hand it’s not the deal-breaker some make it out to be. Your new iPad won’t constantly be pushed to its maximum temperature and even if it is, you can always adjust your hands to avoid touching the hottest spots. It’s not a perfect solution, but it’s the price you have to pay for getting that gorgeous screen without sacrificing performance.